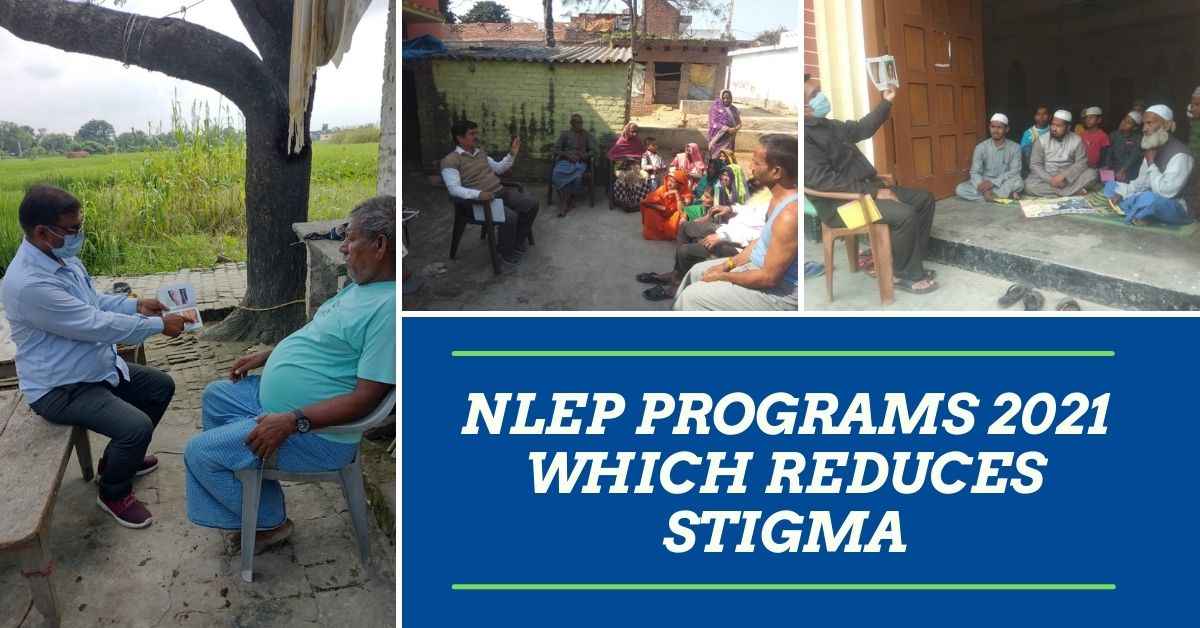 The Government of India launched the National Leprosy Country Program in 1955. After the launch of MDT in 1982, this program was converted to the National Leprosy eradiation Program(NLEP) in 1983, to achieve the eradication of leprosy from the country. and with this goal and with perfect strategy at the end of 2018 India reduces the new leprosy cases and as a result prevalence rate is less than 1 case of Leprosy per 10000 population, and it’s a great achievement of India.

The elimination of Leprosy disease was outlined as attaining a prevalence rate ( PR ) of one case per ten thousand population – achieved in 2005.

AS the NRHM launched in 2005, the program Was subsumed below the aegis of NRHM and being enforced as a centrally sponsored scheme.

The country achieved the goal of eliminating Leprosy disease as a public health problem at the national level by the end of December  2005. After elimination NLEP runs all programs integrated under the newly launched National Rural Health Mission ( NLEP ).

Only a pair of states/UT wasn’t ready to reach elimination at the state level:

209 high endemic districts identified and special activities to be undertaken  in these manners:

The first LCDC was inaugurated in March-April 2016 across 50 districts across seven states, including Chhattisgarh, Jharkhand, Madhya Pradesh, Maharashtra, Odisha, and Uttar Pradesh, with a population of approximately 6.8 crore people. During the campaign, 65427 suspect cases were identified, with 4120 of them being conferred subsequently.

It is a one-of-a-kind NLEP endeavor.

The major goal of this campaign is to prevent disability via early diagnosis of leprosy in affected people.

Every member of the targeted population will be investigated by a search team made up of one male Field level worker (FLW) and one female (ASHA) volunteer at the home level as part of this campaign. The search crew will go house to house according to the Microplane created for the local region in order to find concealed leprosy cases.

LCDC’s criteria are as follows:

This program targeted districts with a prevalence rate of more than one case per 10,000 people in any of the previous three years.

2. ABSULS(ASHA Based Surveillance for Leprosy Suspects):

This campaign started on July 1, 2017. This campaign runs from July 1, 2017, through July 1, 2019. The goal of this initiative is to find hidden Leprosy cases early so that treatment may begin and disability can be avoided.

In this campaign, ASHA conducts a survey in their assigned region and reports the number of suspected Leprosy cases on a particular form, which is then submitted to the PHC.

The information provided by ASHA is collated by a supervisor in the PHC and then checked by healthcare professionals ( DOCTORS ). If a case of leprosy is discovered in these suspect instances as reported by ASHA, the affected individual should be treated right once to avoid becoming disabled.

This program has been started in October 2018 under NLEP.In the PEP program Whenever a new leprosy case is found, after surveying 10 houses adjacent to it, they are fed a single dose of rifampicin according to age and weight. this program reduces the risk of new leprosy cases and child leprosy cases.

When a new disabled leprosy patient, or a new child Leprosy case is found, Then that whole village is first surveyed by the health worker (PMW/NMS/NMA) and they are checked and it is searched whether there is an active leprosy patient in that village who has not got treatment yet, and he is spreading disease to the people around him. If such a patient is found during the survey, then he is taken to the Nearest Government Health Center and registered and his treatment is started.

SLAC was launched on 30th  January 2017, which is the anti-leprosy day. ( on the occasion of the anniversary of Mahatma Gandhi’s death ) This is also celebrated as a world leprosy day worldwide.SLAC was conducted as an annual activity during the fortnight from 30th to 13th February to create awareness about Leprosy.

To pay homage to our nation’s father, Mahatma Gandhi, on his 150th birthday, the central leprosy division of the Ministry of Health and Family Welfare, Government of India, has embarked on a yearlong comprehensive campaign dubbed Sparsh Leprosy Elimination Campaign (SLEC) that will run from October 2nd, 2018 to October 2nd, 2019.in this campaign spread the awareness between peoples about leprosy. Following messages spread through this campaign:

A major component of the campaign is to include all populations that are covered in  Leprosy case detection campaign (LCDC) in districts with a high incidence of grade-2 disabilities due to Leprosy, as well as a Sparsh Leprosy awareness campaign (SLAC), in which gram sabhas are held to raise awareness about the disease’s signs and symptoms, as well as treatment options.

In all these programs, Asha is involved, because she goes to every house and she acts as a link. Asha cooperates fully till the case finding and treatment is completed and for this Asha is given an incentive.

Regular activities should be done under NLEP:

Under this, our health workers spread awareness and reduce stigma among the people so that people themselves recognize the symptoms of the disease, And get themselves treated by going to the government health centers.

Organize a group meeting in villages among the people and teach them about the symptoms of leprosy and reduces the stigma.

Under this, the camp organization is done by the physiotherapist. And in this camp, patients with disabilities from leprosy are told that How to take care of the part which has become disabled and how to avoid becoming ulcer, and patients are taught exercise to avoid muscle damage. And if any disabled patient is found in them whose handicapped part is mobile, then that patient is prepared by counseling for surgery.

Provide them a different type of splints to prevent disability.

Importent points should be remember:

2005 — ( January ) NLEP was funded by the Government of India and supported by Donor Partners.

2005 — ( December ) – Leprosy was declared eradicated as a national public health hazard in India.

2006—DPMR was first implemented as a component of the NLEP, with the goal of preventing disabilities.

2017—Marks the start of the ABSULS program.

2020—Convergence of Leprosy with Rashtriya Kishore swasthya Karyakram ( RKSK ) for educating children in the adolescent age group (13-19 years) about Leprosy at adolescent-friendly clinics.

FAQs for important programs under NLEP:

What is the full form of SLEC?

The full form of SLEC is the Sparsh Leprosy Elimination Campaign

What is the full form of DPMR?

The full form of DPMR is Disability prevention and medical rehabilitation.

What is the full form of IEC?

The full form of IEC is Information education and communication.

What is the full form of FLC?

The full form of FLC is a Focused leprosy campaign.

What is the full form of NLEP?

The full form of NLEP is the National leprosy eradication program.

What is the Full form of ASHA?

The full form ASHA is an Accredited social health activist

What is the Full form of LCDC?

The full form of LCDC is Leprosy Case Detection Campaign.

What is the full form of FLW?

The full form of FLW is the field-level workers.

What is the full form of ABSULS?

The full form of ABSULS is ASHA Based Surveillance for Leprosy Suspects.

How did you like this article of mine, give your opinion in the comment box. In this article, I have tried to give you full information about all programs conducted under NLEP. Give your valuable comments below. In my next article, I will tell you the definition of Leprosy, the cause of Leprosy, what deformity develops in Leprosy, what is the treatment of Leprosy and so many other information which I will tell you. your comments are valuable to me.