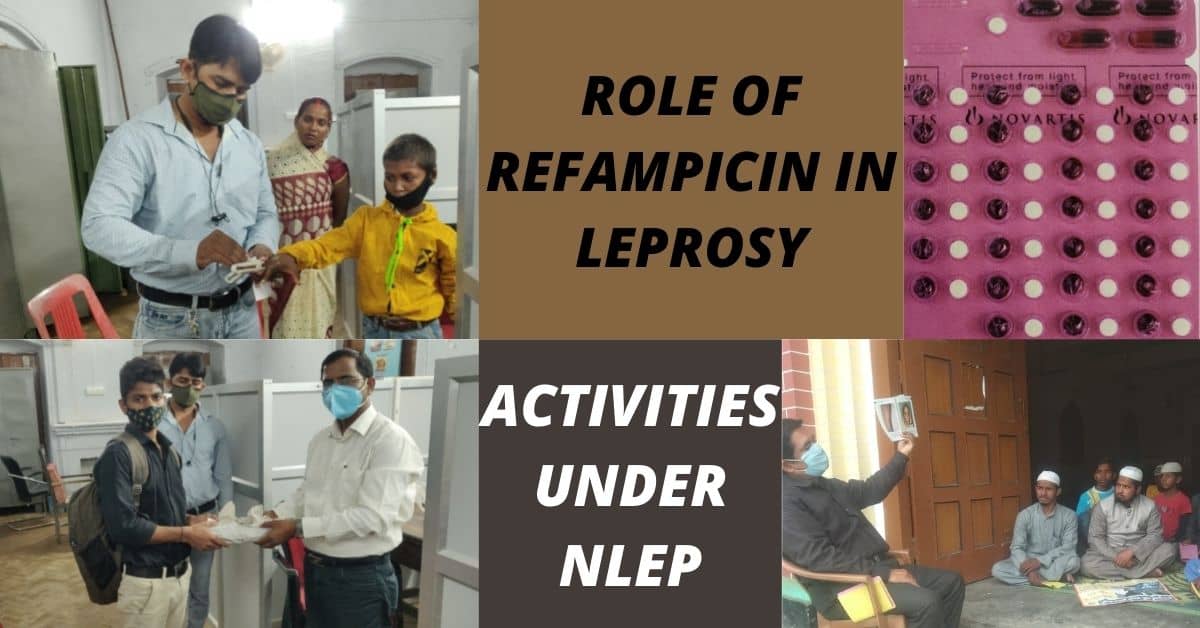 In my previous article I have told you about the history of leprosy(What does leprosy come from), who discovered its causing organism, about world leprosy day, and so many topics which you want to know, I discussed.

If you want to know about the history of Leprosy and Stigma in leprosy then read my previous article History of Leprosy. now we are continuing to discuss medicines used in Leprosy.

Soil samples were brought to the Lepatit Pharmaceuticals Research Lab in 1957 for analysis from a pine forest on the French Riviera. Piro Sensi and Maria Teresa Timble of the Lepatite Pharmaceutical Research Laboratory in Milan, Italy, lead a research team that found a novel microorganism.

This novel species gave rise to a new class of antibiotic-active compounds. French crime narrative riffs were a favorite of Pietro Sensi, Maria Teresa Timbal, and other researchers. This is why these chemicals are known as rifamycins. After two years of hard work, rifampicin, a novel chemical with outstanding potency and tolerance, was developed in 1965. For more detail on the History of rifampicin.

Role of rifampicin in leprosy:

Rifampicin belongs to the rifamycin group of antibiotics. It works by reducing the production of RNA by bacteria. Refempicine kills mycobacterium laprae more rapidly than other antileprosy drugs.

In 1959 Y. Researcher named T. Chang identifies the efficacy of clofazimine against leprosy. A clinical trial of clofazimine was taken in Nigeria during the 1960s.For more detail on the History of Clofazimine.

Subsequently, the Swiss pharmaceutical company Novartis launched Clofazimine under the brand name Lamprene in 1969. Clofazimine was approved by FADA in December 1986.

Role of clofazimine in leprosy:

Clofazimine slows the growth of the leprosy-causing pathogen Mycobacterium leperae and can weaken the germ and kill it. Clofazimine is used in combination with rifampicin and dapsone to treat several forms of leprosy.

Dapsone, also known as diaminodiphenyl sulfone (DDS), is an antibiotic that is widely used in conjunction with rifampicin and clofazimine to treat leprosy.

In 1937, dapsone was tested as an antibiotic for the first time. It was first used in the treatment of leprosy in 1945.

Role of dapsone in leprosy:

Dapsone is an antibacterial drug. Dapsone is a drug belonging to the sulfone group. It works by stopping the growth of bacteria by reducing inflammation.

Is dapsone reduces the immune system:—

There is no evidence that dapsone refuses the immune system because dapsone is also given to patients with a weakened immune system to prevent infection of pneumonia caused by bacteria known as pneumocystis jiroveci.

MDT is a combination of different medicines (rifampicin +dapsone+clofazimine).as treatment of leprosy is not possible with a single drug. MDT is available free of cost at every health care center. One who completes the full course of MDT, his disease is completely cured and he is saved from becoming disabled.

Although the infectious disease was antecedently treated during a kind of ways in which, the introduction of the drug antibacterial within the Nineteen Forties marked the primary breakthrough. Treatment lasted a few years, if not a lifespan, that created it not possible to follow. M. leprae resistance to antibacterial, the sole anti-leprosy drug out there at the time, became rife within the Fifties. Rifampicin and clofazimine were discovered within the early Sixties and were eventually added to the treatment regime, which became called multidrug medical aid (MDT).

MDT was initially advised by the World Health Organization (WHO) in 1981 and launches in 1982. the present MDT protocol includes 3 medications: antibacterial, rifampicin, and clofazimine. For PB cases, the treatment lasts six months, and for MB cases, it lasts a year. The infective agent is killed by MDT and also the patient is cured.

MDT has been offered free from charge by WHO since 1995. Free MDT was initially supported by The Nippon Foundation, and since 2000, its been provided through a partnership with Novartis, that has been extended till a minimum of 2025.

MDT has been accustomed treat quite sixteen million infectious disease patients within the twenty years since it had been initially introduced.

FAQ for Role of Refampicin in Leprosy:

MDT is a combination of different medicines (rifampicin +dapsone+clofazimine).as treatment of leprosy is not possible with a single drug.

What are the milestones of NLEP?

What is the role of Clofazimine in Leprosy?

What is the role of Dapsone in Leprosy?

It works by stopping the growth of bacteria by reducing inflammation.

What is the full form of FLC

The full form is a Focused leprosy campaign.

What is the full form of IEC?

The full form is information education and communication.

What is the full form of PEP?

The full form is post-exposure prophylaxis.

What is the full form of NLEP?

The full form is the national Leprosy eradication Programme.

What is the full form of DPMR?

The full form is Disability prevention management and rehabilitation.

What is the full form of MDT?

The full form is multi-drug therapy.

How did you like this article of mine, tell your opinion in the comment box below. So far, in both my previous articles, I only told you about the origin of leprosy, and told you how the discovery of the medicines that would be used in the treatment of leprosy was done. And now in my next articles, I will share with you all the information from the definition of leprosy to its treatment. Please give your valuable comments.