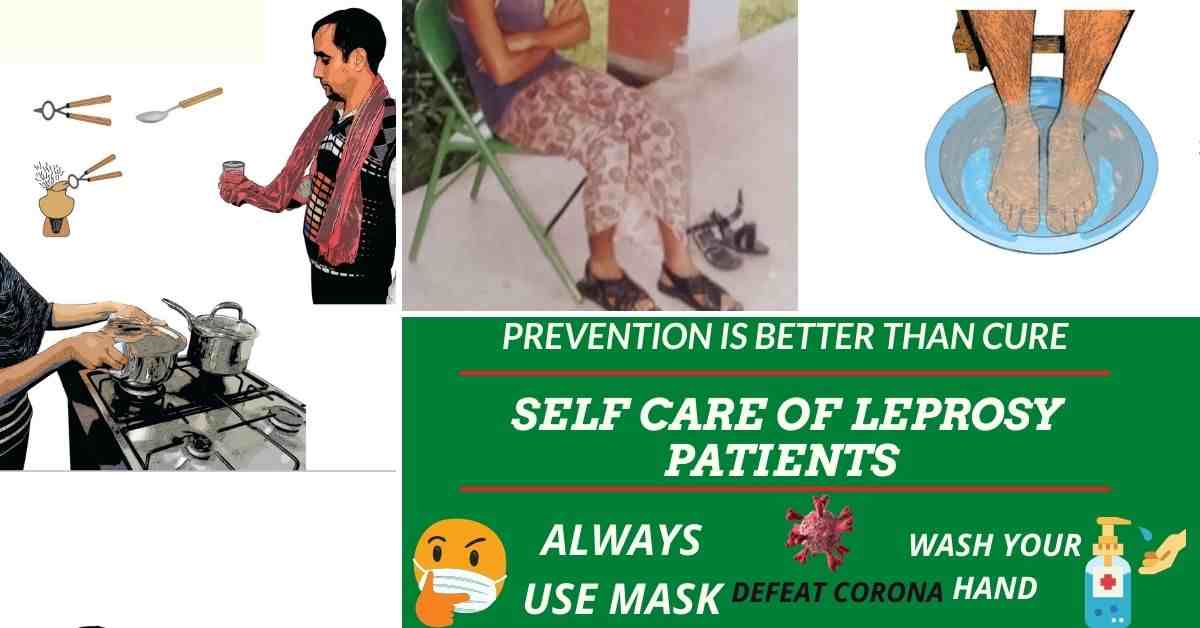 Self-care in Leprosy patients is very important to prevent disability. The major reason for disability in leprosy patients is that the patient neglect this disease in starting because the initial symptoms of this disease are a hypopigmented patch with definite loss of sensation. Due to loss of sensation, he doesn’t feel pain and he neglects this symptom. In a later stage when disease grow and nerves became involved then he started to think about the treatment.

Leprosy is caused by a bacteria named Mycobacterium laprae which affects mainly skin, nerves, nasal mucosa, etc. When the bacteria involves nerves leads to anesthesia. Due to anesthesia patient doesn’t feel any sensation like- hot and cold. Due to this when the patient comes in contact with hot things like fire/holding a hot object etc. patient doesn’t feel a hot sensation and he burns. Likewise, when a patient holds anything then due to lack of sensation, he holds the things tightly so that the things do not fall, and due to tightly holding blister forms, which become ulcerated.

So to prevent ulcer formation and disability it is very important to teach the patient how he cares for himself which are described as follows:

Self-care of hand|Self-Care in Leprosy Patients:-

1. For self-care of hand Don’t hold hard things with bare hands, because Blisters can be caused by the pressure exerted by holding on to hard objects.

2. Use a soft and thick cloth to hold hard things to prevent blister formation.

3. Do not hold hot things with bare hands or go near the fire in cold because heat and steam can cause blisters on your hands.

4. Use a soft and thick cloth to hold hot things to prevent blister formation.

5. See daily whether there is any injury, burn mark, or wound in his hand.

6. To keep the skin soft, soak the hand well in water for 20 minutes so that the skin becomes soft because due to anesthesia there is a lack of sweating.

7. Do not wipe wet hands with a cloth. on wet hands massage well with coconut or mustard oil. By doing this, the skin will remain soft and moist for a long time and will not become dry and ulcers will not develop and do an exercise properly of hand.

1. For self-care of feet Do not walk barefoot in the sun. Heat can cause wounds.

2. Stones and sharp objects can injure the foot and cause a wound by walking barefoot.

3. Do not wear the wrong shoes or slippers because their pressure can cause wounds.

4. Such rubber slippers are specially made for leprosy patients, whose lower part is wart so that no sharp object can enter it, And its contact part with the soles is so soft that there is no pressure on the sole so that wounds do not form in the soles. This type of slipper is called MCR(Microcellular rubber). MCR plays a very important role in Self-Care in leprosy Patients.

5. See daily whether there is any injury, burn mark, or wound in the feet. If there is a wound then daily proper dressing of the wound is very important.

7. Due to lack of sweating in leprosy, the skin becomes hard and thick, Therefore, after soaking the feet, rub it slowly with a soft or jute cloth, or by PV STONE(specially provided for Leprosy Patients on every health care center)which removes the dead skin.

8. Due to lack of sweating in leprosy cracks develops due to dryness of skin so after soaking of feet Do not wipe wet feet with a cloth. on wet feet massage well with coconut or mustard oil. By doing this, the skin will remain soft and moist for a long time and will not become dry and ulcers will not develop and do the exercise properly of feet.

10. Do not sit cross-legged, keep your legs straight. because cross-legged sitting can cause ulcers due to pressure. (Self-Care in leprosy Patients)

12. Stop for a while and rest your feet.

13. While resting, watch the feet carefully to see if there is any injury, redness, or blister.

14. Use a bus, bike, or any other means to travel long distances.

15Don’t go near the fire because if your foot is anesthetic you won’t feel the temperature and your foot will burn and form a wound. (Self-Care in Leprosy Patients)

16. If there is swelling in the feet then elevate the affected limb to reduce the swelling.

Self-care of the eye:-

The major drawback in Leprosy is that There may be paralysis of the eyelids in leprosy.

In this condition, the eyelids are not able to cover the eyes, due to which there is a fear of making wounds in the eyes due to dust particles.

Therefore, if there is paralysis of the eyes in leprosy, then take care of your eyes in the following ways:-

1. Eyelids do not cover the eyes, so use sunglasses to prevent dust particles from entering into the eyes and prevent ulcer formation.

2. Eyelids do not cover the eyes that’s why the eyes remain open while sleeping Due to which dust particles can enter the eyes and may form an ulcer Therefore, while sleeping, cover your eyes with a thin clean cloth.

3. The paralysis of the eyelids of the eye can be cured by surgery, which is free.

4. Due to paralysis of eyelids, the eyelids are not able to cover the eyes, due to which there is a fear of making wounds in the eyes due to dust particles or insects. So wash your eyes daily with clean water. (Self-Care in Leprosy Patients)

5. Due to paralysis of eyelids, the eyelids are not able to cover the eyes and the cornea becomes dry due to lack of moisturization.

6. To moisturize the cornea use eye drops on the advice of a doctor.

7. Check your eyes in the mirror every day and see if there is redness in your eyes, If it is then immediately consult a doctor.

8. proper monitoring of the patient is very necessary so that if the patient shows the symptoms of Lepra reaction, then his treatment can be started immediately and the patient is saved from becoming disabled.

So friends how you like this article give your valuable comments and suggestion also. which help me to improve my skills.Although I have tried my level best to give you more information about leprosy. I hope you like the information about self-care in Leprosy patients. In my next article, I will cover the topic of What exercises leprosy can do to prevent disability, so keep reading my articles and don’t forget to give your comment and suggestion. Your comments are valuable to me. and dont forget to subscribe to my website So that you keep getting information about my every article

FAQs for Self-Care Of Leprosy Patients:

There is no need for isolation of a leprosy patient. because leprosy is not an infectious disease. It can not spread by touching, nor living together. It can be spread only by the droplet of an infected person. So it is very important to treat leprosy patients early.

Which food is good for leprosy patients?

What is the major source of infection of leprosy?

There is no major source of infection of leprosy. Leprosy only spreads from an infected person to a normal person through droplets.

Is there sweating In Leprosy?

No there is no sweeting on the affected part. because in leprosy nerves of the sweat gland are also damaged.

What are the cardinal signs of leprosy?

There are 3 cardinal signs of Leprosy:
1. Patch with definite loss of sensation
2. Tenderness of nerve.
3. presence of mycobacterium laprae in a skin smear test.